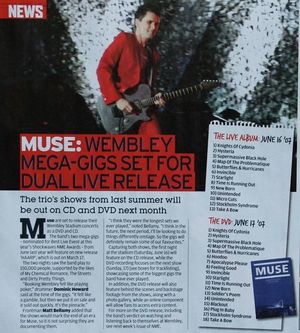 Muse are set to release their Wembley Stadium concerts as a DVD and CD. The band's 2 mega-gigs - nominated for the Live Event at this year's Shockwaves NME Awards - form June last year will feature on new release, 'HAARP', which is out on March 17th. Two nights saw the band play to 150,000 people supported by the likes of My Chemical Romance, The Streets and The Dirty Pretty Things. 'Booking Wembley felt like playing poker,' drummer Dominic Howard said at the time of the gigs. 'It felt like a gamble, but then we put it on sale and it sold out quickly. Its the pinnacle.' Frontman Matt Bellamy added that the shows would mark the end of an era for Muse, so its not surprising they are documenting them. 'I think they were the longest sets we ever played,'* noted Bellamy. 'I think in the future, the next period, I'll be looking to do things differently on stage. So the gigs will definitely remain some of our favourites.' Capturing both shows, the first night at the stadium (Saturday, June 16th) will feature on the CD release, while the DVD recording focuses on the next show, (Sunday 17th), showcasing some of the biggest gigs the band have ever played. In addition, the DVD release will also feature behind the scenes and backstage footage from the shows, along with a photo gallery, while an online component will allow fans to access extra content.

For more info on the DVD release, including the band's verdict on watching and listening back to themselves at Wembley, see next week's issue of NME