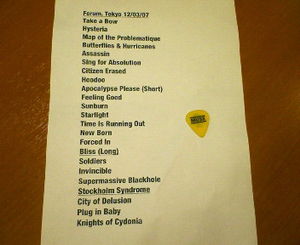 Tickets went on sale 3rd December. The concert was sponsored by J-Wave and MTV Japan.[6]

This was the longest set list ever played by Muse until 2013 and lasted almost two hours, not including encore breaks and so on. Sing for Absolution was played on piano and for the first time after 2 years. Citizen Erased wasn't preceded by a percussion intro. The balloons were released during Bliss.

The entire concert was recorded, and is available in mp3 format here.