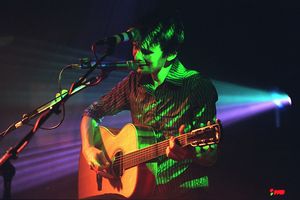 Unintended was performed on an acoustic guitar.

An instrumental version of Fury was played on this gig for the first time.[note 1][2]

The concert was recorded and released as a bootleg by fans in lossy (mp3) format. This recording was formerly available on several large fan sites such as MuseLive, though it has since become very hard to track down. The show eventually resurfaced and can be heard below.

As well, a fan in the audience recorded video of Sober, which was then posted online. It is also available to view below.