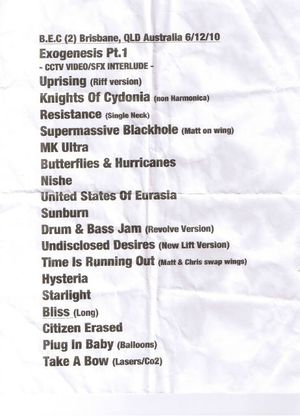 Sunburn was played for the first time since February 6th in Hong Kong.

There was a few technical difficulties throughout the night. There was a problem with Matt's in ear monitors during Exogenesis: Symphony Part I (Overture) which delayed the start of Uprising which was explained by Dom, "Just bear with us for a minute, we need to change Matt's ears". And also after the concert had finished when Dom walked up to say his goodbyes and thank-yous to the crowd, the microphone wasn't on.

The crowd also sung 'Happy Birthday' for Dom's birthday the next day during the delay to which he replied "Thank you".

Before Starlight, Dom saw a fan wearing a shirt with TCC and asked if they attended Teignmouth Community College. There was confusion if the fan had actually attended, as fans nearby yelled no among other answers. Either way, he then dedicated Starlight to that fan.

This gig contained the last performance of MK Ultra to date.

An example of the infamous Second Night Syndrome.