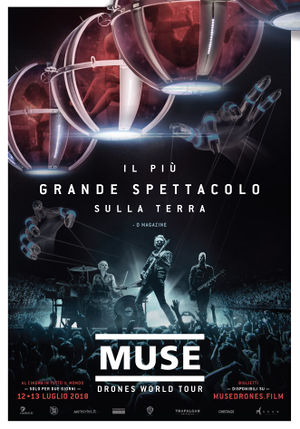 Matthew Bellamy teased that there would be digital release later than the cinema release, as he judged the DVD format was too old, and even wondered who owns a DVD reader nowadays. When announcing that there would be another cinema release for the Simulation Theory World Tour in 2020, he got asked for the digital or DVD release again on his Instagram, and he answered that they might create DVD copies on demand, but not as a general release as the tour is now obsolete, but there's still no news about this.

The Drones World Tour ended up being broadcasted on 2020 new year's eve, at 1.30am on the German TV channel 3sat. Until a potential release, it can be found on MuseBootlegs as HDTV and 24bit FLAC.

Extras (on Cinema only)