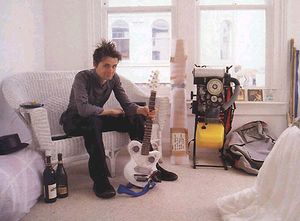 Matt's Paramotor at the back 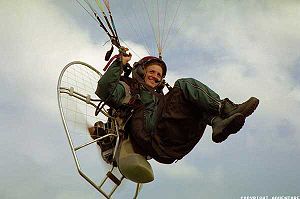 Matthew Bellamy bought a paramotor during the Showbiz tour,[source?] apparently by impulse purchase and costing £6,000,[1] though he recalled in 2008 that it cost around £10,000.[2] He was inspired to buy it from an opponent flying into a boxing match with Mike Tyson.[2] The paramotor was one of Bellamy's first high-priced purchases using the band's royalty payments.[3] The engine apparently is 50cc.[2]

Though he claimed to be learning how to use it[4] and that he'd nearly obtained his licence in the former half of 2000[3] in his 2008 recollection he said he had used it only once, but keeps meaning to learn.[2] It seems that he did arrange some lessons,[5] so the time he did fly it probably was one of those.

Before it was apparent Muse were going to have commercial success as a band, Bellamy planned to use the paramotor to fly over sports matches with advertisement banners. He apparently was approached with an offer of £500 for filming aerial shots of a football match, but by that time Muse were doing well enough financially and so he didn't accept the offer.[6]

Although the device is a powered paraglider, it was dubbed a jet pack. This is a source of confusion, as some people are lead to believe it is a jet or rocket propelled backpack.

Go back to Matthew Bellamy