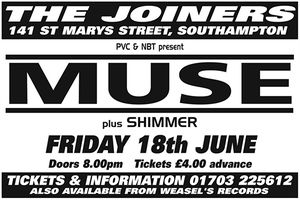 Presented by PVC & NBT. Tickets available at the box office or at Weasel's Records.

Pink Ego Box was played due to a request from a fan in the audience.[2] The full setlist is unknown as 7/9 songs are known, but the other two are not. Based on the closest known setlist (The 100 Club) we can assume these songs are Fillip and Sober. A tenth song may or may not have been played.