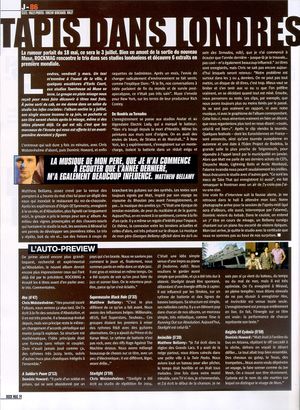 Rumour spoke of the 18th May, it will be the 3rd July. With Muse in the full swing of the album release, ROCKMAG meets the trio in their London studios and uncovers 6 world premier tracks.

London, 3rd March. A taxi takes me to the west of the city, a stone’s throw away from Earl’s Court, to the Townhouse studios where Muse have decamped. In the middle of mixing, the group receives us in order to treat us to 6 fresh new titles. Having hardly got out of the taxi, I’m sat down in a living room, the crucial info: the album will be released on the 3rd July, and the as-yet-unknown single, the 19th June, its artwork and title will be chosen after the mixing, even if some ideas are still pie in the sky. What is certain, is that the extracts offered to us here in advance will feature on the album.

The interview which follows comprises three sessions of twenty minutes, with Chris Wolstenholme first, then Dominic Howard, and finally Matthew Bellamy, who is rather worn out after firemen arrived at his place at 0400 to deal with a torrent of water that was flooding the ground floor restaurant. After the experiences of Origin of Symmetry, recorded on the go, and of Absolution, more fiddly because it matured longer, the group has taken its time for the fourth album. Amongst Provençal vineyards and bats that haunted the studio by night, the sessions at Miraval allowed them to develop their initial ideas. The trio went over things, drank wine and… swatted hornets with badminton rackets. After a month, the urge to radically change their surroundings was felt, as Dom explains, ‘In the end, our conversations at the table were all about the end of the world and post-apocalyptic survival, it wasn’t very healthy.” Muse jetted off to New York, on the home ground of their producer, Rich Costey.

My dad’s music, which I’d never listened to before last year, really influenced me.” – Matthew Bellamy

From Hendrix to Tornados

The recording took place in the Avatar studios and at the legendary Electric Lady, which the drummer remarked upon, “Nothing has moved since Hendrix’s death. Even the pictures on the wall are the same. We wanted (pictures of) blues, Strats and Marshalls…” In New York, the trio experimented, recording in a goods-elevator, isolated the drums in a narrow nook and mixed guitars with synths. The lyrics, as always, are written by Matt, inspired by his trip to the Kingdom of Bhutan shortly before the recording, and by… ‘50s music, “It was an era of worldwide tension, of nuclear fear and of war. Today, we’ve come back to this feeling, like at the end of a cycle. There’s even been a rise in the interest in space. This theme, the connection between current tensions and those from long ago, can really be heard on the album. My dad’s music (in the ‘60s, George Bellamy officiated in the heart of The Tornados, editor’s note) which I’d never listened to before last year – before then, I’d found it uncool – really influenced me.” Twenty tracks have been recorded, but, to this day, Chris doesn’t know which will be kept, “Our problem is definitely in the last three or four (tracks). You can’t put them all on, an 18-track album, it’s too much. It’s better to limit them and keep the ten or eleven we prefer, and finally deciding once it’s all mixed. We’ll work it out after that. The clips, for example, which we more or less screwed up in the past. They don’t really fit, neither with our music, nor the themes of the corresponding album. This time, we would really like to make something decent, which we can look back on later and say to ourselves, “Yeh, that one was good.” After the release, the tour. The festivals – of which one is Eurockéennes in France – have been announced, as well as a European tour in the Autumn and a date at the Boldeva Eden Project, the hall closest to Teignmouth, responding to a request from the local government in January. As Matt is telling his latest CD purchases (Dépêche Mode, Lightning Bolt and Arctic Monkeys) the fire alarm suddenly floods our ears. We evacuate the studio with the other guys. “It’s the guys from Take That who are recording here as well,” the frontman tells me with an air of I-don’t-think-I’ve-seen-a-celeb.

The real end to the interview follows the false alarm, I found myself again in the hall, waiting for my taxi. Our photographer arrives for the afternoon session (she, too, will be interrupted by another alarm), Dominic returns from the kebab shop. In the corridor, we hear a seventh track being mixed, a falsetto Bellamy singing atop a mad piano, accompanied by epic violins. My taxi arrives, and I leave the studio in the sure knowledge that we’ve not yet reached the end of the surprises.

Firstly, even more grandiloquent, researched and experimental than Absolution, the new album is becoming more impressive than its predecessors. ROCKMAG listened to six tracks before talking with the trio. (Here’s the) commentary:

Hex (4:47) - Chris Wolstenholme: “Hex could be the opening track, we’ll see later. We wrote it at the end of the Absolution sessions, and it sounds similar (to Absolution tracks). It has evolved a lot since then, but it’s principle remains the same: a change of periodic agreements which are at the brink of exploding. Its structure is mathematical, the main idea being a formula with neither chorus nor verse. Dom’s never played like that, with very jazzy rhythms, slow ones, followed by more chaotic bits integrated into the whole.”

A Soldier’s Poem (2:12) - Dominic Howard: “It’s about a soldier in prison, who feels abandoned by a country that’s falling apart. We didn’t know how to play it and, finally, we made into a melodramatic jazz style. It’s big and minimal at the same time. We were surprised to see that you can play jazz and make it sound good. We’ll probably keep it, because we’ll have a whale of a time with it.

Supermassive Black Hole (3:32) - Matthew Bellamy: “It’s the most different to anything we’ve ever done. We’ve had some Belgian influences: Millionaire, dEUS, Evil Superstars, Soulwax… These groups were the first to mix R&B rhythms with alternative guitar. We’ve added a bit of Prince and Kanye West. The drumbeat isn’t rocky, with Rage Against The Machine riffs underneath. We’ve mixed a lot of things in this track, with a bit of electronica; it’s different, slow, quite funny…”

Starlight (3:59) - Chris Wolstenholme: “Starlight was written in the practice studio at the end of 2004. It was a simple idea, stemming from a piano impro (he hums, editor’s note). We wanted to keep it as simple as possible, and that was very difficult to do. Starlight had to be spontaneous, unleashing an energy that was difficult to capture. It’s influenced by The Strokes, on a drumbeat and basic basslines. Its structure is simple, and its melodies catchy. There’s a pop element in each of our albums, a simple bit, very melodic, like Time Is Running Out on Absolution. Today, Starlight is that one.”

Invincible (5:20) - Matthew Bellamy: “I wrote in the Great Lakes area. There was snow everywhere, we were holed up in a small town in the Twin Peaks. We had rented a boat to go fishing, the weather was horrible and we were all ill. Once in our pathetic motel, without TV or anything, I was bored stiff, and I wrote the beginning of the song. I don’t know if it came from the boat, the weather or the seasickness, but it was very optimistic. We recorded it at Miraval, in a total rage: we were annoyed that we hadn’t succeeded (in recording) Hex, and Invincible came all by itself. The recording is almost entirely live. In fact, the energy in the title is true: the performance of each represents its lyrics.”

Knights of Cydonia (5:50) - Dominic Howard: “Matt was at the back of the bus in Arizona, repeating the jerky riff to death, outside we could see the desert rolling … all that went very well together. Galloping horses, Texas, trumpets… We wanted to depict a journey, to make it sound like Joe Meek. We found the title recently. Cydonia is the name of the Martian site on which you can the face of Mars.”

With special thanks to "Plugged in Baby" on the official boards for the translation.

Go back to Rock Mag