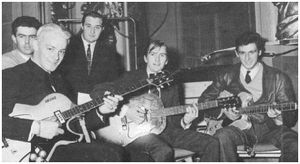 This band included Matt's father George Bellamy on rhythm guitar and was the first British band ever to have a number one single in the United States. 'Telstar' was an instrumental song written by legendary producer Joe Meek and is reportedly a favourite of former British Prime Minister Margaret Thatcher. The band were said to be one of the biggest influences on The Who. In England they were called The Tornados.