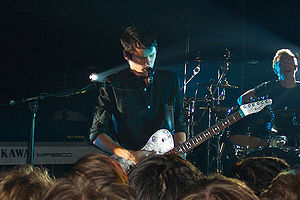 A private show. Ten pairs of tickets were made available through a competition by Warner Music in which participants had to choose which of the six promotional gigs they wanted to go to, and answer the following two questions:

Answers had to be sent to muse@warner.music.com.[3]

There was a power cut at the end of Hysteria and at the beginning of the solo of Sing for Absolution.

A French documentary is available here