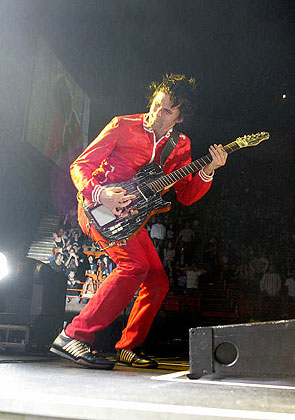 ROARING: Matthew Bellamy and Muse brought their huge sound to a packed Forum on Tuesday night. KELLY A. SWIFT, FOR THE ORANGE COUNTY REGISTER

Review: The art-metal trio's thunderously received Forum show proves these Brits are a secret no more.

The blossoming of English art-metal rose Muse is the sensation no one saw coming.

Sure, maybe holdouts at Warner Bros., the trio's label (and distributor during its Maverick days earlier this decade), still had faith after four albums. "Somehow," someone must have thought, "these guys are going to break here. Their fans will come in time."

So they stuck by the band, taking cautious delight when 2003's "Absolution" yielded a modest hit – the irresistible apocalyptic groove "Time Is Running Out" – and eventually went gold. And "Black Holes and Revelations," last year's follow-up and the strongest Muse record to date, showed even more promising signs of imminent success. It helped, of course, to launch with a single, "Starlight," with as much appeal to Coldplay lovers as Tool-heads hungry for a different sort of heavy sound.

Lo and behold, the album debuted in Billboard's Top 10 – yet, like so much other stirring music these days, the disc has had zero commercial staying power, receiving only steady (never oversaturated) airplay from KROQ and negligible attention from video outlets.

What, then, can explain how Muse managed to sell out the Forum on Tuesday night?

Easy: word-of-mouth reaction to its concerts, still among the most powerful tools in music promotion.

Muse has built its reputation stateside – and in Southern California in particular – in the same manner as Radiohead and Tool, comparably enigmatic forebears whose tremendous shows solidified a following no amount of weird clips aired in the wee hours on MTV ever could. An amalgam that in the past year or so has finally carved out its own identity from a wealth of instantly detected influences, Muse is proof that old-fashioned marketing – relentless touring combined with tenacious spirit – can still work.

And when it does, it can result in rabidly devoted fans.

So it is that virtually every song Muse played Tuesday night – including anything off its mostly neglected 1999 debut, "Showbiz" – was greeted with the sort of bellowing roar one hears when Rush kicks off "Tom Sawyer." Partly that eruption came as a release after such a long wait: The outfit's remarkable performance at September's Inland Invasion in Devore, where it upstaged a late and long-in-the-tooth Guns N' Roses, was a breakout moment that had attendees craving more and absentees buzzing with anticipation for another sighting.

The Forum gig, then – one of only two North American headlining dates from Muse before the band joins My Chemical Romance on tour – is really the first chance recent SoCal converts have had to experience the group's mighty bombast. And what a sonic blast it was: Where Radiohead amazes with experimental chemistry, Muse dazzles with tightly collaborative virtuosity.

Bassist Chris Wolstenholme can be as forceful yet nimble as the Who's John Entwistle, while drummer Dominic Howard deftly teeters between meter-shifting chops-flashing and firmly anchoring grooves (Muse may be the only art-metal outfit you can dance to).

But soaring vocalist Matthew Bellamy is the band's double threat, a super-skilled fretman adept at both classically arpeggiated solos and chugging Nirvana riffs who from time to time will sit down at the piano and make like a rock Rachmaninoff.

If it all sounds incredibly over the top, well, it is. Take Queen, Maynard James Keenan, Thom Yorke, bits of Metallica, Depeche Mode (noticeable on "Map of the Problematique"), a dash of Gothic noir and plenty of the unabashed grandeur of Yes and Emerson, Lake and Palmer, puree it all and add heady lyrics about theology, alien life, conspiracy theories and the end of the world – and out pours Muse.

It would all be disastrous if Bellamy and Co. were absurdly dramatic about their presentation, but instead, like Tool, they just hunker down and play, relying on trippy visuals and the occasional plume of smoke to compensate for their static nature. Yet that's exactly the sort of concert that gets people coming back for more: You may not have heard of Muse now, but once you encounter it live, if it's your cup o' tea, you'll take to it like a heroin addict takes to methadone.

That fan fervency is what will keep Muse afloat for many years to come, while other flavors (the Killers, say, whose own brand of propulsive rock paled in comparison the night before at Staples Center) seem apt to fade quickly. Killers fans may prove fickle; Muse fans will only grow stauncher.

And mark my words: By 2010, it'll be one of the main attractions at Coachella.

Go back to OC Register