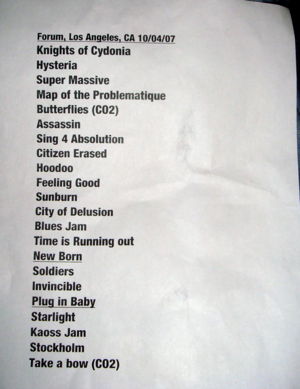 Editor in chief of concert information company Pollstar, Gary Bongiovanni, said that Muse headlining The Forum by themselves is "exceptional". He concluded that it indicated "huge" popularity in Southern California, as well as comparing the success with that of Depeche Mode in the 1980s.[5]

Two tickets were set as the first prize for a now concluded competition entitled the "Muse Street Contest", along with a "photo pass" and digital camera, which will allow the winner to take photographs in the press area in front of the stage for the duration of the first three songs.[6] Before Sunburn Matt said: "this is for anyone whos been in love" after Sunburn he said cheers. Matt kicked over his guitar amp during Stockholm riffs. Dedicated starlight for people in back. Matt "This is for the people in the back"