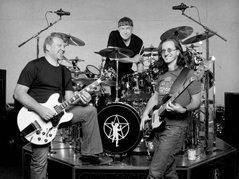 Rush is a Canadian band that was formed in 1968, released their first album in 1974, and (as of early 2014) are still recording new material. They are often categorized as "prog", but have worked in a wide variety of styles throughout their career, with varying degrees of success, and defy easy categorisation.