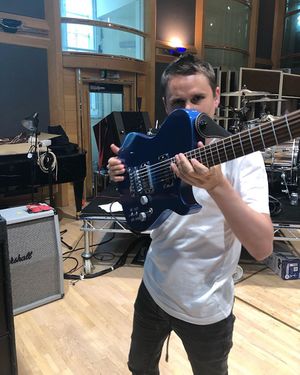 This guitar is in terms of specification exactly the same like the Manson Matt Black Stealth 2.0 guitar. The neck features the old manson logo, as does the covered Psychopaf PF-1 Humbucker pickup.

It was handed over to Matt during May rehearsals for the EU/UK leg of the Simulation Theory Tour 2019 at AIR Studios.

The guitar will presumably be used for future Simulation Theory Tour gigs allthough it has not made an appearance yet.

The guitar was on display with Manson's other guitars at the Manson guitar stand on tour with Muse during Simulation Theory Tour's UK and France legs.