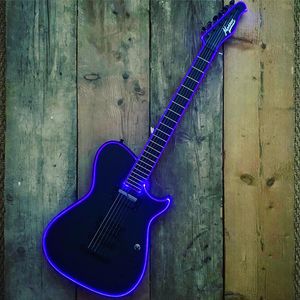 This guitar is almost identical in hardware to the Matt Black Stealth LED, except it features a Humbucker Sustainiac Pickup at the neck rather than a single coil.

Rather than a simple LED strip stuck to the outside of the body as a retro-fit on the original LED stealth- the TronCaster features bespoke improved lighting installed by Mansons, the lights are integrated around the edge of the entire guitar including the neck and headstock. This was very likely achieved by using Laser Wire as opposed to LEDs - which is notably not as bright as LEDs, but gives a cleaner, more subtle look - while still looking great in the dark. The challenge in finding a suitable light source that doesn’t cause severe interference with the guitar’s signal - and also without incorporating hundreds of LEDs in the body would’ve been tough, but as always, Manson find a way! It also looks like it is fitted via a slight carve into the front of the body, rather than around the side or stuck into the body like binding would be - requiring minimal routing.

Visually, the guitar's lighting bears some resemblance to the Manson Keytar.

Like all stealth models, it features all black hardware with custom black Tone and Volume knobs.

The guitar also features an old Manson logo on the headstock.

TronCaster is labeled by Matt's tech as "2" and "Laser".

This guitar first appeared at the MTV World Stage Bilbao gig in 2018. It is used for songs in standard tuning.