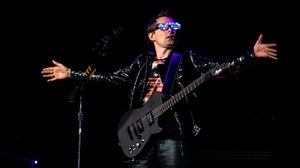 This guitar is exactly the same like the batch of Manson Matt Black Stealth guitars, except it features a Sustainiac Humbucker instead of a single coil Sustainiac and a covered pickup instead of a uncovered one. The neck features the old manson logo, as does the covered Psychopaf PF-1 Humbucker pickup.

This guitar first appeared at the European leg of the Simulation Theory World Tour 2019.

It is used for Songs in Drop D tuning an often thrown around quite a bit after the Metal Medley.