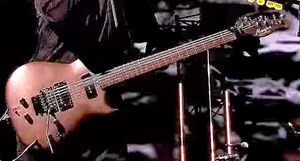 The Copper Bomber 2.0 was created after Matt reported issues with Copper Bomber 1.0's Floyd Rose FRX bridge. In terms of looks, the shapea and circuitry, it is nearly identical to it and the Manson Chrome Bomber. Like all Manson Guitars from 2015, it features a truss rod adjuster at the end of the neck. Unlike the Copper Bomber 1.0, the guitar also features standard Gotoh tone and volume knobs and a standard Floyd Rose Tremolo System, not the FRX.

It was first used at the BBC Radio 1’s Big Weekend gig. It's last live use was at the Ischgl Ski Resort gig, where it made it's only live appearance in 2016.

The guitar was numbered by Matt's tech as "4" on the strap. It appeared throughout the '15 Festivals Tour and a few gigs of the Drones 360 Tour in Rig A, with the Manson Metal Bomber in Rig B.