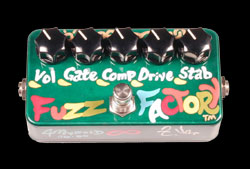 The Z.Vex Fuzz Factory is the flagship pedal for boutique effects company Z.Vex. Each one is hand-made by Zachary Vex and as with all Z.Vex products, it comes guaranteed "for as long as [Vex] is on the planet"[1]. Whilst the standard Fuzz Factory is hand-painted, the budget Vexter series is silk-screen printed.

It has five pots (from left to right: volume, gate, compression, drive and stability) which are used to change the tone and depth of the effect.

Matthew Bellamy first came across the Fuzz Factory in Japan, and has made heavy use of it since. Most notably, it has been used for the intro to Plug In Baby, and the "siren" sound before the solo of Blackout live. It was also the primary distortion effect used during the Origin of Symmetry/ Absolution eras. It has also been used to create background noise in various Origin of Symmetry era songs, including Micro Cuts and Hyper Chondriac Music. This effect is used certainly for New Born, Plug In Baby, Citizen Erased (solo), Dead Star, Eternally Missed, The Groove, Can't Take My Eyes Off You, and Please Please Please, Let Me Get What I Want.

Some of his Manson guitars have this effect built in to them, but with only the stability and compression controls on the front. The remaining controls are mounted on the back, usually set at the same position throughout their gigs.

Guitars with effect built in

The Rust Relic also had this effect built in.