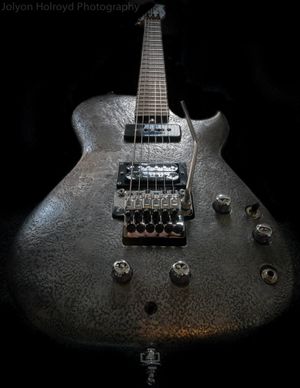 Third Floyd Rose tremolo guitar made for Matt in 2015. It features a different paint to the other two Copper Bombers, and has black pickup covers.

In terms of electronics and hardware, it is the almost identical as the Manson Copper Bomber 2.0 with the only difference being the uncovered MBK-2.

The guitar saw it's live debut at the 2015 Sonisphere Festival.

The guitar was used in Rig B for the Drones Festivals Tour in 2015 and half of the Drones 360 Tour, being last used at [Glasgow SSE Hydro 2016 - 17th (gig)|first of the two Glasgow gigs]] in 2016 and succeeded by the Manson Xenokroma Bomber.