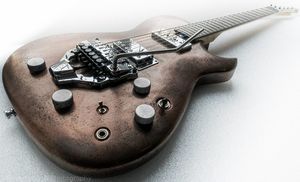 This guitar is one of 12 new Manson Guitars built for Bellamy in 2015.

It is very similar to the Chrome Bomber in terms of circuitry and body shape, however, it features a unique copper finish and a new Floyd Rose FRX tremolo bridge. Also, like all new Manson guitars from 2015 it features a truss rod adjuster at the end of the neck. The guitar also features Manson custom aluminium hardware for the tone and volume controls, as well as custom machine head buttons.

The Floyd Rose FRX Tremolo system is the Floyd Rose which can be attached on the Tune-O-Matic holes, without any routing needed to be done to the body. The guitar was returned to the workshop in April 2015 for work, as Matt described having issues with the bridge. Tim Stark said that he did not have time to fully make sure that the FRX bridge had any issues, as it was urgently needed for the build and the upcomming tour. The guitar was referred as "Copper Steampunk Lozenge" by Tim Stark.

This guitar first appeared at the Belfast Ulster Hall on the opening night of the 2015 Psycho Tour and was last used at Brighton Dome, the last night of the Psycho Tour.