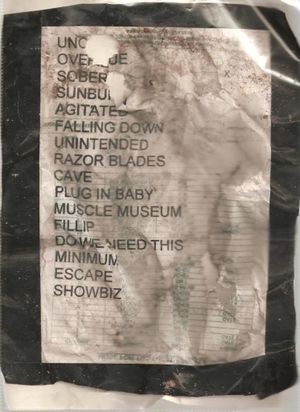 Muse were an hour late coming on stage.[3] Because of Crashland's extended setlist, the band were very late and had to cut several songs from the setlist (Falling Down, Escape, Screenager and approximately two others).[4] Muse did play Twin, though, which was not originally on the setlist, likely as a quick compensation for the skipped songs.[5] A fan who attended the gig claimed that Uno, Sunburn, Cave and Muscle Museum were performed.[6]

A photo of the set list was discovered from someone who attended the gig but attributed it to the Nottingham Rock City performance from October 1999. She said that she found the set list is terrible condition and decided to scan it before it was completely destroyed. The scanned image survived but the set list did not; it was destroyed when her cellar flooded. Excluding the three confirmed scrapped songs (as well as adding the Twin compensation), this is the most accurate version of the setlist today, though at least one and possibly other songs were also cut from the setlist at the last minute as well.