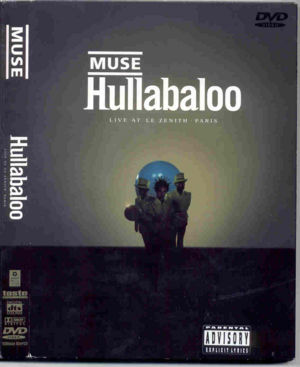 The DVD can be streamed online from the official Muse website.

Matt on a interview: "Hullabaloo, the front cover... we were trying to do a mock of 'The Prisioner', is like a kinda of some geezer, I think he's a secret agent he's retired [...] he suddendly wakes up one day, in a strange uncivilized town, he's stuck in [...] he can't escape and everytime he tries to escape a large white balloon is chasing him down the beach. So I think for the album cover we wanted to do like a picture of us, kinda just like about that geezer from 'The Prisioner'.[1]

Promo copies of the DVD were distributed over a month before the release date.[2] All promo DVD-Rs were respectively marked with the words "Documentary" or "(Live Footage)" prior to distribution. The Ukrainian video cassette "Muse: The Movie" features content from the second disc of the DVD.[3]

Features 40 minutes of off-stage 'adventures' from the around the world in 2001, accompanied by a 'soundtrack' of b-sides which appear on the first disc of the Hullabaloo Soundtrack album. The electric version of Shine is used during the footage, despite the acoustic version being the one featured on the album.

The gallery contains front-covers and an interactive discography.