"I'M pretty sure there will be a Muse creche backstage at most gigs," said Chris Wolstenholme, Muse bassist and Teignmouth prodigal son.

In an exclusive interview with the Herald Express ahead of Reading and Leeds Festivals, Chris was speaking just a few days before bandmate Matt was to become a dad with Hollywood A-lister Kate Hudson, daughter of Goldie Hawn. 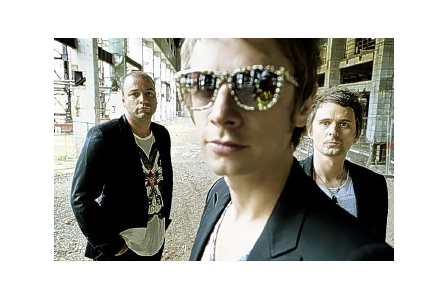 "Having kids is a major part of life and, for that reason, it has always been important for me to have a happy balance between band life and family life," said Chris.

"I'm sure it will be the same for Matt. I would think that touring will be a major part of life, but it's inevitable that as you get older the touring can become less intense. I'm not sure if we are quite at that stage yet, but I'm pretty sure there will be a Muse creche backstage at most gigs."

The Herald Express has followed Muse throughout their career, so it seemed only fitting they should be part of the new weekly paper.

The Herald Express archives show the band were listed in gig guides, playing for free at The Piazza and Parrot in Torquay, before moving up to the dizzy heights of Lanterns in Ashburton, where they were able to charge £3 in 1997.

It's a world away from the sell-out, knock-your-socks off performances at the likes of Wembley and Glastonbury.

Reminded of the early press cuttings, Chris said those days were a struggle.

"In all honesty, being a young band in Devon was very difficult for us at that time," he said.

"There was very little in the way of proper music venues so we used to play a lot in small pubs — which didn't usually go down well as we were pretty loud and most people wanted to enjoy a quiet pint.

"There were quite a few battle of the bands things going on.

"We weren't really that bothered about winning them. It was just an opportunity for us, and other bands, to get out there and play live."

However, there were some which inspired The Teignmouth Community College trio in their formative years.

This may be the first time it has been said on the record.

"There are two people who were very important in the early development of the band," said Chris.

"The first was Jill Bird, who was the head of music at the time we were at school.

"Before Jill took over the music department, it was the usual collection of crappy Casio keyboards, tambourines and glockenspiels.

"Jill completely revamped the music department and understood the importance of modern music to get young people inspired as well as embracing the history of music.

"Within two years of being at Teignmouth Community college Jill had kitted out the music department with drum kits, decent keyboards, guitars and basses and some recording equipment.

"She was also very good at involving people who weren't particularly musical and out of nowhere there were lots of bands and singing groups.

"The other person was Dennis Smith.

"Dennis is the owner of Sawmills and Dangerous Records.

"We had been aware of Sawmills as it was probably the only studio in Devon and Cornwall which had produced any big records.

"I remember looking at the brochure, probably some time in 1994, and thinking how great it would be to record in a place like that with a proper producer — but it was well out of the price range of three 16-year-old school kids.

"In October of 1995 Dennis heard about the band and called us up to arrange coming to see us at a gig.

"We happened to have a gig in Cornwall somewhere that week and he came along. Although he liked some of what we did, he told us that we had a lot of developing to do and, when he felt the time was right, he would put us in the studio for a few days to record an EP to release on his label.

"Over the next two years Dennis came to almost every gig we did in Devon and Cornwall and dangled the studio carrot in front of us, which obviously inspired us to tighten up and work as hard as we could.

"Some time in early 96, we had a particularly good gig at the Cavern Club in Exeter. Just as we thought that maybe all of this talk of the studio was never going to come to fruition, Dennis walked in the dressing room, obviously impressed by the gig, and told us he had set aside a week in May for us to use the studio.

"That was our first experience of a proper studio and made us realise how good we could sound.

"Those recordings ultimately led to us getting a record deal in the US which basically kick-started the bands career. If Dennis had not shown that belief in us so early on, and pushed us to improve, its debatable whether the band would be here today."

And what a career the band have had.

Half a dozen MTV and Q Awards, eight from the NME, a couple of Brits, four from Kerrang, two Grammy's [sic] and sales of albums topping 10 million.

"We used to only get one award and had to take it in turns but now we always get one each as to avoid arguments" Chris said.

"Most of mine are in the house but occasionally a family member will pilfer one to stick on their mantle piece."

It is their live shows that have really embedded them in the hearts and minds of fans.

Their HAARP Tour was recently voted as Wembley Stadium's greatest ever event and their Glastonbury set was simply something to behold.

"We have never really had any routines before a performance," said Chris.

"At Wembley I basically spent two weeks being the most nervous I have ever been. Glastonbury is always quite a relaxed vibe. You get to check out the other bands and the backstage is very social. It's a really enjoyable day."

Chris said whether playing in a pub or a Glastonbury, they have always tried to improve as musicians.

"Its very difficult to set goals when you have basically achieved more than you set out to in the first place.

"I didn't think any of us could have imagined how big the band would get.

"We used to go to a lot of gigs at the Lemon Grove in Exeter University when we were younger and back then it would have been more than enough to play in front of 800 people there.

"Although we were always confident in our abilities as musicians we were under no illusions that becoming successful was going to be extremely hard. So many things come into play.

"Obviously the music has to be very good but a lot of it is about timing, the people you meet and having a bit of good luck along the way. The goals now are obviously very different to back then but the most important thing for us is to improve as musicians and continue to explore new things in music and become better at what we do."

In 2009 the band surprised the music world and 'came home' bringing their music and spotlight to Teignmouth.

The two sell out gigs brought the town to a standstill, and gave more than something back to their loyal army of fans.

"It was whilst living in Teignmouth that a lot of people had asked whether the band had any plans to play in the town, but as the town had no obvious venue it never happened. It was fantastic that we managed to pull it off and its something that the town will never forget."

Chris added: "The idea came up around the time we were recording the album. We didn't want to do the usual London showcase as the first gig for the album, and as it was the 10th anniversary of Showbiz, our first album, we thought it would be nice to play in our home town.

"We had not played in Teignmouth since summer 1995 at The Ivy House.

"It was a pretty major challenge to make the gig happen as Teignmouth had never hosted such an event. Also, there were inevitably some people who didn't want the gig to go ahead. I had to attend a meeting with the councillors, 10 days before the show, to try and get permission to hold the gigs.

"We had a great turn out from fans and I think by the end of the hearing, the councillors saw that the overwhelming support for the gig meant that they couldn't really say no.

"The gigs themselves were great. It was pretty strange playing a show in such familiar surroundings. There were so many faces I recognised in the crowd, it was pretty surreal. It was amazing to see the town buzzing for the week or so before the show. In all the time I had lived in Teignmouth, I had never seen it like that."

While in Teignmouth the band were able to support a local cause they are passionate about. The Helen Foundation was set up in memory of friend and actress Helen Kirk. It operates across Teignbridge supporting young people's aspirations in the arts by providing school and club-based arts workshops, special awards in schools and individual bursaries.

The band were able to give tickets to the foundation to auction off as well as artwork to raise cash. Since the gig Chris has moved away from Teignmouth.

"I moved away just over a year ago and Matt and Dom have not lived there for the best part of 10 years but we all visit regularly because our parents and families still live there. Although Teignmouth is no longer where we live, it is still a big part of the bands history and ultimately the birth place of the band so for that reason Teignmouth will always be a big part of who we are."