Best Act in the World Today

Muse made it to the shortlist.[1]

Greatest Act of the Last 25 Years

Muse made it to the shortlist.[1]

Best Act In The World Today

Best Act In The World Today

Best Act in the World Today

Black Holes and Revelations was nominated, but did not win. Also nominated: Empire by Kasabian, Under The Iron Sea by Keane, Razorlight by Razorlight, Whatever People Say I Am That's What I'm Not by Arctic Monkeys, Eyes Open by Snow Patrol. Arctic Monkeys won.[4]

Best Rock Act in the World

Bellamy also presented 'The Q Legend Award', which The Who won.[4] 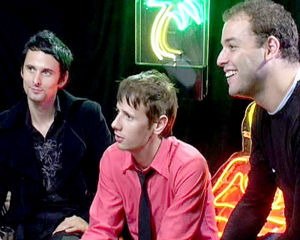 Origin of Symmetry was nominated. Also nominated: PJ Harvey – Stories From The City, Stories From The Sea; U2 – All That You Can’t Leave Behind; Radiohead – Amnesiac; Travis – The Invisible Band; Stereophonics – JEEP.[8]