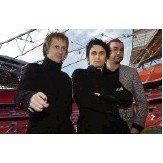 Rock heroes Muse have been crowned this year's best British band in the NME awards.

The supergroup of Matt, Dominic Howard and Chris Wolstenhome have been on the music scene for a decade.

The band could not be there but sent a video message from one of their gigs in Taiwan.

Drummer Matt Howard [sic] said: "This is very kind, thank you very much. I must go, as I have to play a riff."

Their former manager Dennis Smith, of Totnes, said: "I am not surprised they won best British band."

Mr Smith, who set them on their road to stardom in their early days, strongly believes the only way is 'onwards and upwards'.

He added: "They have worked very hard and are just going to go on and on. I am sure Matt will be highly amused by winning sexiest man.

"Picking up the latest awards is just yet another confirmation of my thoughts about their potential in the early days."

They are booked to open the new £800 million Wembley Stadium, and have collected a host of other awards.

The NME awards, voted for by fans and presented by Lauren Laverne, were held at London's Hammersmith Palais.

NME editor Conor McNicholas said: "This is the verdict of the real passionate British music fans, the ones who keep the music scene alive at gigs up and down the country week-in and week-out.

"It's a reflection of how strong the British music scene is that there's so much to be celebrated."

Phil Korthals, of Dawlish, who was Muse's manager from February 1994 until 1999 when they parted company, said he was 'extremely proud'.

"I am always proud of them and I am never shocked when they win best live act because that was one of the most important factors in my remit with them.

"I would say they are one of the top five bands in the world and we in the South West should be proud of them."