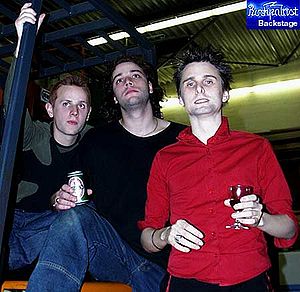 Letter written by Muse during the festival

A performance for Rockpalast,[3] a German music television show on WDR.[3] Muse partook in an internet chat during the festival.[3]

During the solo of Sunburn, Matt caught a button on the piano which changed the piano's tone making it sound a lot lighter and brighter.

Matthew Bellamy had a little problem during the intro of Plug In Baby with the fuzz factory.

Balloons were released during Bliss

The band were clad mostly in black. Bellamy wore black jeans, along with a black jacket which had white zippers and a long neck. Dominic Howard wore a black t-shirt and blue jeans, as did Christopher Wolstenholme. While Bellamy's hair was clearly waxed, it was not spiked in the same manner as with later concerts, such as at the Zenith in Paris.

The show was broadcast over television[3] and streamed over the internet.[3] A recording of this broadcast is available encoded using x264 in avi format here[registration needed].