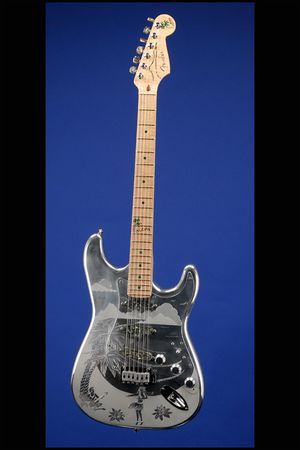 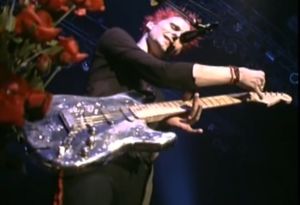 The Fender Aloha Stratocaster is a limited edition guitar made by the Fender Custom Shop in 1995. Only 153 of these were made. The guitar was built in memory of Hawaiian musician and inventor Freddie Tavares, who died in 1990. Tavares was one of the designers of the Fender Stratocaster, amongst other Fender products (such as the Bassman amp). Tavares also played the signature steel guitar swoop in the beginning of the Looney Tunes theme song.

The guitar is unique in that it features an all-aluminium body and pickguard, which is hand engraved with a Hawaiian scene by master artisan Ron Chacey. It also features an one-piece birds-eye maple neck with a fretboard of 22 frets and green pearl dot inlays with Aloha and Palm tree custom inlays made by Larry Sifel. The Fender logo and the cresting wave above the logo on the neck are inlaid in abalone and on the ball end of the headstock is a palm tree inlaid in white and green pearl, with the signature of Freddie Tavares in black. On the back of the headstock is a decal with "DE 4 / 074 of 153 / Custom Shop / USA", also in black. The neck is a bolt-on, with the neck plate engraved "Custom Shop/USA". The aluminium tremolo cover features an engraved "Freddie Tavares/Commemorative/Aloha/Stratocaster". This guitar weights only 8.00 lbs, has a nut width of just over 11/16" and scale length of 25 1/2". The Aloha Strat includes three singlecoil Lace Sensor pickups.

Bellamy's Aloha is №74 out of the 153 produced. Matt paid his old guitar technician £200 pounds for it. The guitar is now estimated to be worth in the region of £2000. Apparently, the guitar is difficult to keep in tune due to it's age.

The guitar can be seen on the Hullabaloo DVD.

This guitar was also used during a mimed performance of Muscle Museum on a Norwegian television program. [1]

Go back to Fender