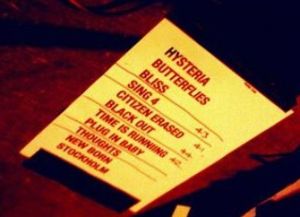 Ten pairs of tickets were made available through a competition by Warner Music in which participants had to choose which of the six promotional gigs they wanted to go to, and answer the following two questions:

Answers had to be sent to muse@warner.music.com.[1]

This was the only known performance of Hyper Music from 2003 until the 2011 Leeds Festival.

A small Time Is Running Out launch party also took place at an unknown Cologne location either on the 6th or the 7th where two songs were performed. It is rumoured but unconfirmed that Time Is Running Out was performed at this date, requiring this to need further verification.

For the launch party. A recording was not made.

Hysteria and Butterflies & Hurricanes were broadcast by MTV Europe.[3] These can be found here[registration needed].