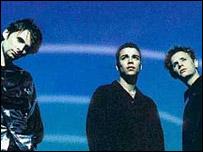 Muse originally formed in Devon under the name Gothic Plague

Formed in 1997, they have defied low expectation to grow into a band that can headline Glastonbury, V, T in the Park and Denmark's Roskilde festival as part of an extensive European tour.

In the process singer and guitarist Matt Bellamy has been established as the unconventional frontman of a trio known for blending musical elements rarely heard together.

At 13 they formed the band Gothic Plague, changing its name to Fixed Penalty, Rocket Baby Dolls and finally Muse.

Manager Dennis Smith said: "When I went first to see them at a little show in a Cornish venue I recognised that there was something very special.

"Matthew has an incredible range of thoughts, he's got such a restless, imaginative and creative mind. An older head on much younger shoulders is how I've always seen him." 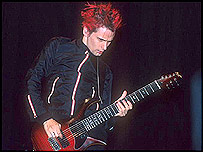 The trio released their self-titled debut EP on Dangerous Records, followed in 1998 by the Muscle Museum EP, its title track an angry riposte to anyone criticising them for trying to be original.

"I have played in every toilet, but you still want to spoil it," sang the ambitious Bellamy, who was then 22.

Nevertheless his soaring vocals were likened to those of Radiohead's Thom Yorke and, with Muse's first two albums sharing Radiohead's producer John Leckie, some critics dismissed them as copycats.

But while armchair critics ignored them, Muse built up a loyal following through a series of electric live shows in support of debut album Showbiz.

Bellamy also become known for his intriguing interviews, in which he freely discussed space, evolution, religion and his love of classical music.

In 2000 the NME asked him what his three final wishes would be. Bellamy replied: "That gravity in the world was lighter so spiders would die and we'd only need one leg to bounce on. That I could be happy in solitary confinement and that artists would no longer require the media as a tool to reach people."

Muse continued to notch up top 30 hits before their third studio album Absolution caught the unconverted by surprise in 2003. 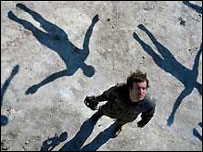 Third studio album Absolution has been a global chart success

Fleshing out radio-friendly tunes with apocalyptic lyrics, full-on orchestration, grunge guitars and vocal acrobatics, it was hailed as an album of the year by publications as diverse as Kerrang!, Q and The Daily Telegraph.

NME journalist Dan Martin said: "I think the reason that we started talking about Absolution in such hyperbolic terms is because everything about the record is completely to the extreme. Certainly the first track, Apocalypse Please, it actually says 'this is the end of the world.'"

The album topped the chart in the UK and France, and made the top five in Japan and throughout mainland Europe.

Despite Muse's global success, Bellamy says he is determined not to become complacent.

"I'd rather set my sights as a musician way higher than what I think I can ever achieve," he told BBC Radio 1 in May 2004. "I know that I'll never get there but it means that I'll keep trying."