Merchandise for the Psycho UK Tour

The Psycho UK tour started March 15th, 2015. It's named after the first announced song from the Drones album, Psycho. Muse have played various medium-sized venues around the UK during the course of the tour, in most of which, Muse haven't played at since the Origin of Symmetry tour. It was the smallest tour Muse have done in years.

Allthough the tour was small and only lasted for a week, it featured many songs that Muse haven't played in many years (such as Assassin, Uno and Muscle Museum), as well as the premiere of Hullabaloons for the first time after The Resistance Tour and a live debut of Psycho, Reapers and Dead Inside.

Both Matt and Chris seemed to have wore the same outfits as they did in the Psycho lyric video, for each gig of the tour, while Dom wore a black sleeveless shirt. 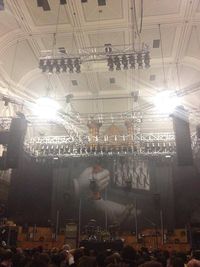 The stage setup was relatively simple, with a simple Drones album cover backdrop and a series of LED striplights, placed vertically behind the band. Matts piano also wasnt on the stage for the tour-