I definately think it would be an idea to sub-categorise between Manson and Non Manson.

What do you think?

I think its best to leave it as a list of brands, trying not to over big up Manson guitars from the others. Though I'm happy to put Manson on top of the list to kinda make it known that they're his primary guitars used.--Crazybobbles 11:59, 14 December 2005 (GMT)

Yeah I see your point,

Although apart from the occasional destroyer to erm, destroy/give away I don't think he uses anything but the mansons these days.

Cheers for sorting out the amp bit for us, just getting used to how you want things to look.

No problem, the gear section still needs some help on making it easy to navigate, slowly getting there though. The wiki guides i found were quite difficult to use at first but soon you just get use to it. One of the easiest ways to find out how things are laid out is to edit the page and check out the source

There will probably be a thing where it lists what gear they used at what periods, but the gear section just lists all the gear they'ved used as a universal thing, but still, gear section is pretty much under development in how it's going to be laid out--Crazybobbles 12:30, 14 December 2005 (GMT)

It might be an idea to have photos with matt playing his guitars.

It's a problem on the early guitar that the only pics about aren't ones of his, which is especially a problem with the SG-X as the paint job on that was either custom or VERY rare as I've never seen another or even a pic of one.

So we might have to do with some unprofessional pics of early guitars? Or professional ones but in a different colour (like the photo of the parker fly I uploaded, it'seither one that wasn't Matt's or a bad pic of Matt's)

It's up to you

Probably the one with Matt, I remember seeing a photo of him with his rack of SG's, not sure where that went though :/ 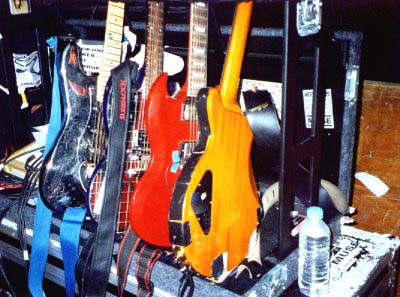 Although I saved that from fobbedoff ages ago so not sure if I have permission to use it.

Aye thats the one, Daniel Staples is working on this so I'm sure he wont mind too much. Might wanna call it MattSGRack of something, theres going to be alot of mattracks in the future im sure

Shouldn't Chris's guitars be listed here and not his bass guitars? He has used his own -it seems- guitars on a number of occasions for certain songs such as Unintended on Hullabaloo and the latest live version of Hoodoo (while Morgan plays bass)

Can someone delete the minor brand pages? It's useless having pages for brand for a single guitar. --Muserwiki 08:15, 26 November 2007 (GMT)

Should we put in something about the Ebony Les Paul and Classic Fender Matt uses in the Uprising "Making of" video?--Muserism 02:49, 14 February 2010 (GMT)

do you know which guitar is this?

If I remember right (I've seen it few years ago on YT), there exsists an interview where Matt explains, that he got this strange looking white guitar with built in speaker in Japan I think. IIIAliAsIII 14:40, 16 January 2011 (GMT)

I've found a clear photo of the guitar, but I can't quite make out what the brand is. http://30.media.tumblr.com/tumblr_lgkhlrQfWH1qfpb3ho1_500.jpg

Does anyone have any idea what guitar this is? http://29.media.tumblr.com/tumblr_ld8d4rFPTV1qcdbbco1_500.jpg It looks like this gig is from the late '90s.
-It looks like the Manson 7 String E Guitar as it bears some shape resemblance, but it can't be due to it looks like there are only 6 tuning pegs.--The Groove

Based on the headstock and body shape, it looks like a PRS guitar, except the output jack is in the wrong place. --Dyingatheist 01:01, 13 December 2010 (GMT)

i found another pic of him with a differint guitar thats a ibanez sz520 too. Lolzorz

The Guitar In The Upright Corner.

A Squier Telecaster. Here it is being used and abused: http://www.youtube.com/watch?v=PdSVT2KHPMU

Does anyone have any idea what guitar Morgan uses live for United States of Eurasia? It can be seen clearly in the performance of USOE at the Albert hall for Children in Need.

Isn't it a Epiphone Wilshire? SC-1

Yes it is,a red and white one i think.

And with a different head stock to that 3 a side open book headstock. Pete from the Libertines and Babyshambles alike plays one of these as his primary guitar! SC-1

Here's an early photo of Matt with an unknown acoustic bass guitar: http://27.media.tumblr.com/tumblr_lfhx278nzV1qe0mhdo1_400.jpg It seems unlikely anyone will know what it is, but oh well.

Another Cavern club photo with an unidentified guitar.

http://30.media.tumblr.com/tumblr_lggn9dFaEv1qd8t6eo1_500.jpg I have a feeling it could be a Squier Strat or a Yamaha Pacifica. 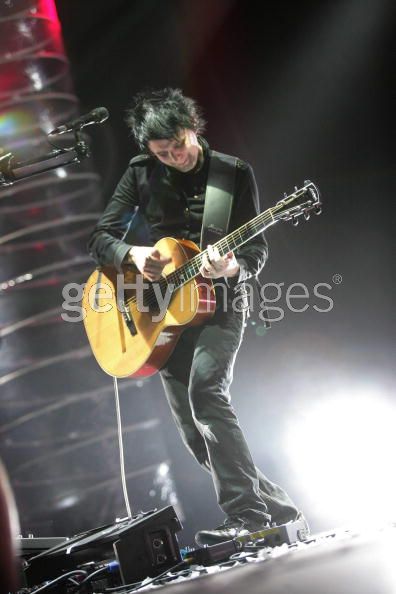 looks like a Larrivèe. Idk what's the right model...

Anybody know what guitar Matt's using in the picture on Muse's wikipedia page near The Resistance section? It looks like the Delorean.... --- ThePluggedInBaby

I can't link pictures from Wikipedia so I'll copy here the descriptions of three pictures from The Resistance section, and write wich guitar is Matt using on it:

Yeah it's number three. But it doesn't really look like the Mirror. The pickups are black and, I don't know if it's the lighting or not, it doesn't have a mirror finish. More a silver/grey/snow look. - ThePluggedInBaby

Mirror finish can be deceptive and so can be chrome pickups if the picture is shot from longer distance or/and with lower lighting (you can also notice the FF switches behind the bridge on the body) IIIAliAsIII 15:12, 4 April 2011 (BST)

Ah, at closer inspection, those pickups do look a bit chromey. Thanks for the help though :) - ThePluggedInBaby

http://www.youtube.com/watch?v=REGXvLrqySI&feature=player_embedded it seems to be an epiphone wilshire, anyone agrees with me?

I'm not sure whether I should add the "Cort MBC-1" page to the guitars section or not. I'd love to see some suggestions about it. KeTeVemCovers (talk)

It definitely deserves a new section in the "Gear" page, its not a guitar that has been used by Matt, and most likely never will be. A signature section should do it, as I'm out of ideas where to put it, at least for now. KeTeVemCovers (talk)