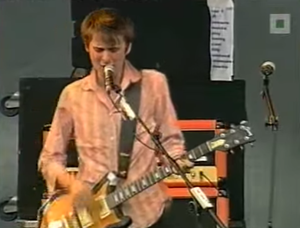 Hey, I recently stumbled upon the Werchter 2000 video and, upon watching it, discovered that for a brief period of time you can see the setlist. Up until now there's only been three confirmed songs, however this setlist shows eleven on it. Only problem; I can't read it. I can only analyze so far into it. Now at the time of this gig there were fifteen songs on rotation (Sunburn, Muscle Museum, Fillip, Falling Down, Cave, Showbiz, Unintended, Uno, Sober, Agitated, Minimum, Yes Please, New Born, Feeling Good and Plug in Baby). Without any suspicions I can say that all but four of those songs are going to be on the setlist. I can't exactly read it fully though, so I could use your help. I know for sure that Sunburn and Muscle Museum are on it somewhere, however there are still three others left. Any help would be fantastic. Thanks, GameGear360 (talk) 02:07, 17 November 2014 (GMT)

Thanks for the help. I've looked over it again, and from what I can tell, it reads: "New 1", "1", Sunburn, "Muscle", "Plug", "Feeling", Cave, Fillip, Unintended, Minimum, Showbiz. I was considering your input on Escape, however at the time it hadn't been played since March and wouldn't be played again until October, leading me to believe it probably wasn't played. I still have some doubt with the placement of Sunburn and Uno as it theoretically could have been "Sb" instead of "1" or "Uno" but it otherwise fits chronologically. Thanks again. GameGear360 (talk) 22:26, 17 November 2014 (GMT)

Hey, just wondering what your opinion is on having a sort of "Gallery" section of the site for live videos. I've been thinking about this a lot lately and I think it could be really useful. In a summary, my idea is that like the tablature page, Musers will be able to select from a list of songs and then be brought to a page filled with live performances of the song, organized by year. I think it would be big work for some of the more commonly-played songs (PiB, TIRO, New Born) but could be quite valuable to the site. Plus it could help preserve some rare live videos the same way MicroCuts.net used to. Thanks and have a great day. GameGear360 (talk) 21:41, 19 December 2014 (GMT)

Hey kid! By an Unknown reason, the images you upload are not visible... I thought that my computer broke or something .. ... But I tried with other computers and my cellphone... and it's the same..

It seems like there's a server issue for images with the new musewiki servers...we'll have to wait to see when the bugs will be fixed. Yes, I agree with you, well The Unsustainable Tour is sort of like a subcategory to The 2nd Law tour, so maybe its time for a change, and make it a separate tour, it was a separate tour after all. I reccon making a new page for The Unsustainable Tour and tours like that. KeTeVemCovers (talk) 20:56, 11 March 2015 (GMT+1)

Hey, I've thought up an idea for expanding the live section of song articles which I've added to the Spiral Static page and I really could use your feedback. Basically it offers two Nav boxes which explain how many times the song was performed (with a link to a page detailing this list on the number shown) as well as when it was last performed for songs that have been retired (no performance in two most recent tours). I'd be very interested to know your thoughts on this, how it could be improved, or whether it should be used or not. Thank you very much! GameGear360 (talk) 17:44, 20 May 2015 (BST)