Soundtrack to the apocalypse (20060413 Kerrang article) 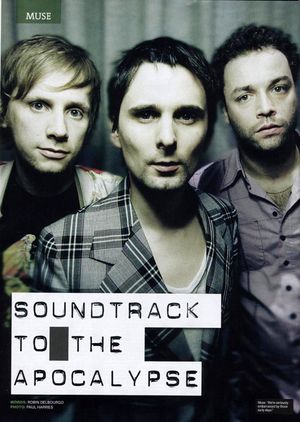 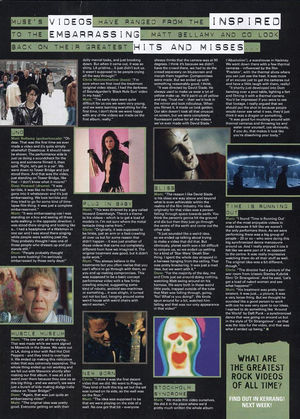 Soundtrack to the Apocalypse

Matt Bellamy (Guitar/vocals): "Oh dear. That was the first time we ever made a video and it's quite simply shameful! Disastrous. It should never be shown. The performance side is just us doing a souncheck for the song and someone filmed it, then said, 'Right, let's get in a car'. We went down to Tower Bridge and just stood there. And that was the video, just standing on Tower Bridge, like that - I don't know what it means"!

Dom Howard (drums): "It was terrible, it was like no thought had gone into it whatsoever and it's just embarrassing. We look terrible and they tried to go for some kind of time-lapse film thing. It was just a complete embarrassment".

Matt: "The one with all the crying... That was made while we were signed to Maverick in the States. We were out of LA, doing a tour with Red Hot Chili Peppers - and they tried to overhype it. We ended up making this ridiculous video that was extremely expensive. The whole thing ended up not working and we fell out with Maverick shortly after making our first album. It was all a bit weird over there because they saw us as this big thing - and we weren't, we were just a bunch of kids making dodgy indie videos on Tower Bridge"!

Dom: "Again, that was just quite an embarrassing video"!

Matt: "The original idea was pretty good. Everyone getting on with their daily menial tasks, and just breaking down. But when it came out, it was so shiny, LA pristine... it just didn't suit us. It wasn't supposed to be people crying all the way though"!

Chris Wolstenholme (bass): "I'm sure when we first read the treatment (original video ideas), I had the darkness of Soundgarden's 'Black Hole Sun' video in my head".

Matt: "The early days were quite difficult for us 'cause we were very young, and we were learning everything for the first time. I don't think we were happy with any of the videos we made on the first album, really".

Matt: "This was directed by a guy called Howard Greenhalgh. There's a theme to his videos - which is to get a load of models in. I'm not sure where the metal tentacle thing came from".

Chris: "Originally, it was supposed to be limbs, just an arm or a foot crawling all over us but for some reason that didn't happen - it was just another of those videos that came out completely different from how we imagined it. The original treatment was good, but it didn't quite work".

Matt: "You always believe in the treatments but you often realise that you can't afford to go through with them, so you end up making compromises. This was supposed to be a basic concept performance video with a few limbs crawling around, suggesting some kind of robotic, android sex-machines or something... it was alright, it turned out not too bad, hanging around some weird house with weird chairs with weird women".

Chris: "I think it was the first decent video that we did. We went to Prague. They kind of built this big set but the set was turned on its side, so the wall was on the floor".

Matt: "The idea was supposed to be that we were playing on the side of a wall. No one got that bit - everyone always thinks that the camera was at 90 degrees. I think it's because we didn't have the crowd there, we had to do the crowd separately on bluescreen and morph them together. Compromises were made. But we ended up with something reasonably good, I think.
It was directed by David Slade. He always used to make us wear a lot of yellow make up. He'd paint us all yellow and say, 'Trust me' - then we'd look in the mirror and look ridiculous. When you filmed it, it made us look golden. Our skin doesn't look all that unusual on screen, but we were completely fluorescent yellow for all the videos we've ever made with David Slade".

Matt: "The reason I like David Slade is his ideas are way above and beyond what is even achievable withint the realms of the film industry. His idea originally for that video was a person falling through space towards earth. You think the person's gonna hit the ground and die but they just go through the centre of the earth and come out the other side.
It just sounded like a weird idea, so we ended up talking about trying to make a video that did that. But obviously, planet earth was a bit difficult to conjure up, so we ended up settling for a kind of 'Star Wars' Death Star thing. I spent the whole day strapped in a harness hanging from the ceiling. That was pretty knackering. It was just a mad idea, but we went with it".

Dom: "For the majority of the day, me and Chris just sat around doing nothing, watching Matt swing around on his harness. We were both in these weird little pods, trapped outside of the tube that Matt was falling through, going, 'No1 What're you doing?'. We kinda spun around for a bit, watched him falling and that was our only appearance in that video"!

Matt: "We made this video ourselves. We did it in the place where we'd pretty much written the whole album ('Absolution'), a warehouse in Hackney. We went down there with a few thermal cameras - influenced by the film 'Predator', with the thermal shots where you can just see the heat. It was more of an excuse just to get the cameras out and have a little laugh with them, really!
It shortly just developed into Dom bending over a pool table, lighting a fart and filming it with a thermal camera. You'd be impressed if you were to see that footage. I really argued that we should put the shot in because people would never see what it was, they'd just think it was a dragon or something.
It was good fun mucking around with thermal cameras and throwing ice and water over yourself, 'cause obviously, if you do, that makes it look like you're dissolving your body".

Time Is Running Out

Matt: "I found 'Time Is Running Out' one of the most enjoyable videos to make because it felt like we weren't the only performers there. As we were performing there was a big group of people - 20 or so - who were doing this big synchronized dance manoeuvre around us. And I really enjoyed it 'cause it felt like we were part of it as opposed to the centre. It was really impressive watching them do all their stuff as well. The original idea was a bit different, though".

Chris: "The director had a picture of the war room from (classic Stanley Kubrick film) 'Dr Strangelove'. And he said, 'Let's get a load of naked women and see what happens'"!

Matt: "His treatment was pretty non-existant, it was just... a picture. It was a very loose thing. But we thought he sounded like a good person to work with 'cause he was very open to our ideas. I wanted to do something like 'Around the World' by Daft Punk - a synchronized dance that was going on around us but in the style of 'Dr Strangelove' - so that was the idea for the video, and that was what it ended up being".