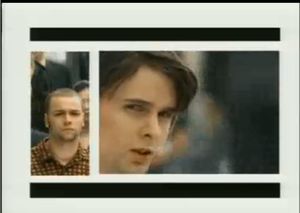 There are two versions of the Uno video.

The first one consisted of Muse standing on London Tower bridge and footage of a soundcheck.[1] The soundcheck was recorded first, after which the director suggested going to London Tower bridge.[1] The bridge footage was shot during a rush hour, with people walking towards the band members who were themselves standing still looking at the camera.[1] Matthew Bellamy was standing on a box, with an earphone in one ear.[1] Looking back on the video in 2005, Bellamy and Dominic Howard thought the video embarrassing.[1] In 2012, when asked about their 'biggest regret when looking back at their whole career', one of the members answered 'making our first video for UNO. Wore a terrible Vegas-style shirt!'[3]

This was the first music video Muse recorded. Described by Matt even back when the video came out as "dodgy", the Cave video was scrapped to take time to readjust this video.[4] 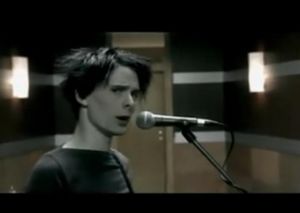 The second is of the band playing and a girl trying to reach the band through a labyrinth of doors. After a while, the girl finds a door through which Bellamy appears to stand. Through the door is actually a corridor with a deep pit. After she bursts through the door, she is able to avoid falling. The end of the video has the girl facing a door with '1' on it.