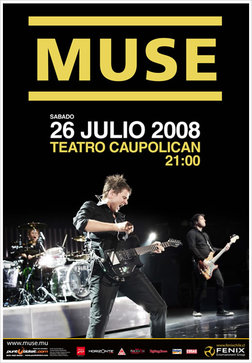 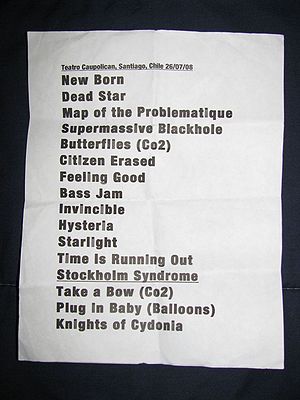 One of nine Latin American concerts in 2008, this one was first announced by the official Chilean fan club Eternally Missed on the 4th of May. It was confirmed to them by the Fenix Entertainment GroupChile. Although Eternally Missed stated that the tickets would go on sale in early June,[2] when announced by the Muse website on the 23rd of May, the pre-sale started the same day, while the general sale date was given as 26th of that month.[1]

As with the gig in Guadalajara, there was a H.A.A.R.P. signing session in the afternoon, this time inside "Feria del Disco Paseo Ahumada", from 15:20 until 16:00.[7] In the final moments of the Ashamed outro, Bellamy drew out a Chilean flag, spun it around and passed it to Dominic Howard, who proceeded to place it onto the foot drum.[5] A chupalla (traditional Chilean hat) given by one attendee of this session[8] was worn by Matthew Bellamy during Feeling Good.[9] In response to Bellamy's hat, the audience started to whistle and clap a traditional cueca encore during the first notes of the song. Invincible was played a semitone lower in the key of B rather than its usual key of C.

A recording of this concert is available here[registration needed].