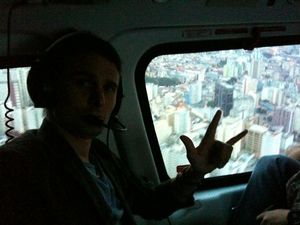 Matthew Bellamy travelling to the stadium via helicopter 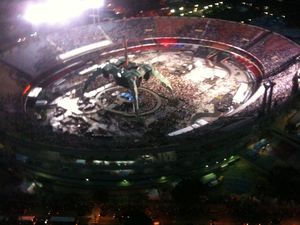 Aerial view of the stadium on arrival

One of seven 2011 support gigs, Muse supported U2 in São Paulo[1] for three nights during April 2011, with this date having been the first of three. Announced on the 29th of November,[1] a Muse-fan pre-sale took place from 09:00 to 17:00 on the 6th of December, which required a password given on the official Muse news section, "RESISTANCE".[2] Said pre-sale was limited to four tickets per person, while general sale started the following day.[1]

Muse travelled to the stadium via helicopter, with timing that Matthew Bellamy called "cutting it thin".[4]