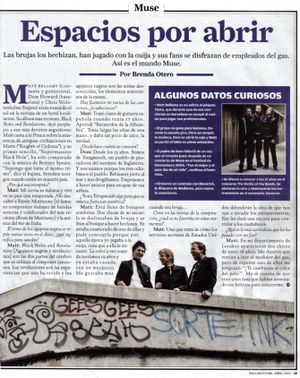 Witches charm them, they have played with the ouija board and their fans disguise themselves as gas employers. That's the Muse world

Matt Bellamy (singer and guitarist), Dom Howard (drummer) and Chris Wolstenholme (bassist) are having a sunbath on the terrace of an hotel in London. Their latest album, Black Holes and Revelations, impressed their most loyal fans: Matt sings like Prince about the existence of ancient civilizations in Mars ("Knights of Cydonia") and their first single, "Supermassive Black Hole" has been compared to Britney Spears' music. "I guess it has the same rhythm", says the bassist. We will know if that's true when they come to play in our country.

Q: Why that trumpet [in some songs]?

Matt: My girlfriend is Italian and I have lived in her country for some time. That is where I discovered Ennio Morricone [the famous Italian Soundtrack's composer and collaborator of the latest Morrissey's album] and Southern Italian Music.

Q: The subject of the black holes is repeated a few times in the album, what does it mean for you?

Q: There's some flamenco in some of the songs, can you play it?

Matt: I took Spanish guitar lessons when I was 17. I learnt "Recuerdos de la Alhambra" [Memories from the Alambra]. I had long nails in one hand, and it was a little nasty, actually.

Q: How long have you known each other?

Dom: Since we were 13. We're from Teingmouth, [sic] a fishers' village in the South West of England. And [sic] we got together because we three hated the village. We drank next to the sea and we took drugs. We started to make music to escape from that asphyxia.

Q: Did Teingmouth [sic] have anything special which made your music so esoteric?

Matt: It's full of shadowy forests. Two girls from my school used to disguise themselves as witches and they went to the forest to play as if they were true witches. I was in love with one of them and I got to know her because at that time I played with ouija board, which she loved. I met her again when we were 19 and she was already married, with a mechanic. I preferred her when she was a witch...

Q: You believe conspiracy theories, which one is your favourite right now?

Matt: The one that talks about how the secret services of the USA will spread the idea that aliens are going to invade us. That will give them an excuse to control the citizens.

Q: What is the most surreal thing that happened to you with a fan?

Matt: Two boys of around 18 came to my flat in London. They told me that they had to read the gas meter, but then one of them asked "did you change your hair colour?". I realised that they were fans that had invented that story to meet me.

Go back to Rolling Stone Mexico