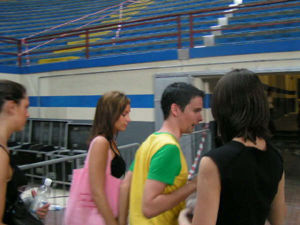 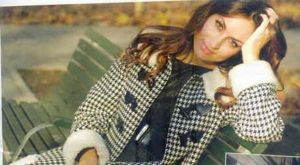 Gaia Polloni was Matthew Bellamy's girlfriend circa 2001-2010. Bellamy met Polloni in a bar in Milan. During this meeting, they started "talking, or something" - Polloni's English wasn't very adept at the time. According to an interview with Polloni published in March 2007, they had been together for six years and engaged for two months. Said interview also revealed that she was 26 years old when the interview took place.[1] Thus, the initial meeting probably took place in early 2001 and they got engaged in early 2007.

Polloni claimed to get up at 06:00 every morning and drive for an hour through dense traffic to Milan, where she was doing an internship at San Raffaele Hospital with "psychotic" patients, as part of training to become a clinical psychologist.[1] Bellamy's account appears to be different however. He has said that she is actually a medical doctor, suggesting that she is a psychiatrist rather than a psychologist.[2] As of July 2007, Polloni is now a Doctor of Clinical Psychology.

She took a break in her training after meeting Bellamy to move with him to the UK, and when Polloni decided to move back to Italy and finish her training, Bellamy decided to follow her. They moved to Moltrasio.[1]

During the pre-release media coverage of Black Holes and Revelations, Bellamy stated that a "couple" of the tracks were inspired by his girlfriend, particularly by her nagging. Said tracks possibly include Map of the Problematique. Polloni believed that Starlight "belongs" to them, and Bellamy dedicated Starlight to her at the DatchForum, Milan in December 2006.[3] Whilst Bellamy was rehearsing songs, he asked Polloni to play bass with him.[1]She said later in Vanity Fair that her favourite songs by Muse are Map Of Your Head and Starlight.[4]

Polloni "quite often" travelled with Bellamy on tour as his personal stylist. When she didn't, he brought back a present for her.[1]

There was a lot of speculation as to whether or not they had broken up or not. At the 02 Arena during Map of the Problematique Bellamy changed the lyrics from "Since I met you" to "Since I lost you". The reason for their break-up has remained unknown but in an Interview for Big Day Out he mentioned that they had broken up, because people on the internet had blown something out of proportion and made him look like he was "trying it on with other girls"..[5] The couple had broken in mid-December 2009. Bellamy confirmed on BBC Radio 1 that "Neutron Star Collision (Love Is Forever)" was inspired by the break-up.

In early 2010, Matt tried to return with her, but he never got another chance or at least he failed, as he told to an Italian magazine in March 2010:

"The moment I reached my highest professionally I was left by the woman I love. She’s an Italian girl who lives in the area of Lake Como, where I bought a house to be with her. To have your heart in pieces while every other aspect of your life couldn’t go better is a traumatic experience. In appearance, life is fine. But as you put your day in focus, everything turns grey. What happened made me realise that complete, absolute happiness doesn’t exist. She has left me, but I’m not giving up. I will do anything I’m capable of to win her back. I’m going to try everything." [6]

Go back to Matthew Bellamy