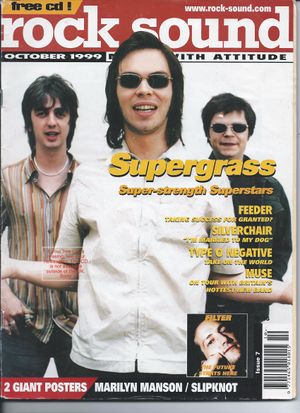 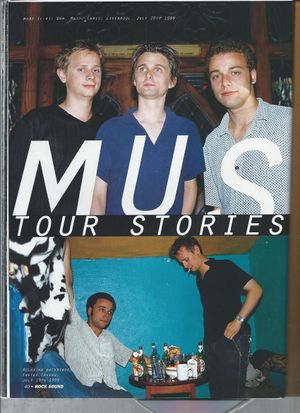 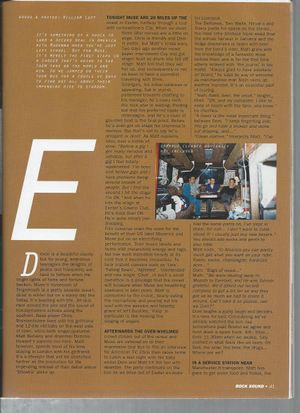 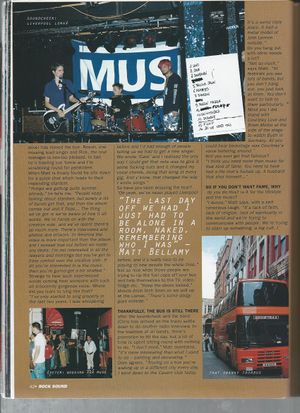 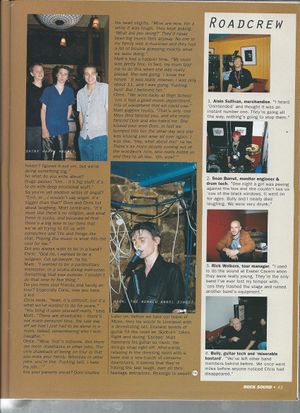 An article in the October 1999 issue of Rock Sound Magazine, pages 40 to 43. The interview took place during July 1999 while the band played Exeter Cavern and Lomax Liverpool.”

It’s something of a shock to land a record deal in America with Madonna when you’ve just left school. But for Muse, it’s merely the first steps in a career that’s going to see them take on the world and win. So we jumped on their tour bus for a couple of days to find out all about their impending rise to stardom.

Devon is a beautiful county but for young, ambitious teenagers the delights of peace and tranquility are hard to fathom when the bright lights of fame and fortune beckon. Muse’s hometown of Teignmouth is a pretty seaside resort, dead in winter but on a sunny day like today, it’s bustling with life. Jet-skis race around the pier and the sound of holidaymakers echoes along the seafront. Bass player Chris Wolstenholme lives with his girlfriend and 12-day old baby on the west side of town, while both singer/guitarist Matt Bellamy and drummer Dominic Howard’s parents live here. Matt however, spends most of his time staying in London with his girlfriend. It’s a lifestyle that will be stretched further as the promotion for the impending release of their debut album Showbiz picks up.

Tonight muse are 20 miles up the coast in Exeter, halfway through a tour with co-headliner Cay. When we meet them later nerves are a little on edge. Chris is friendly and Dom is polite, but Matt’s kinda wary. Two days ago another music paper interviewed Cay and got singer Anet so drunk she fell off stage. Matt felt that they set her up, and consequently is not so keen to have a journalist travelling with them.

Strangely, his initial coldness is appealing. Sat in stylish, patterned trousers chatting to his manager, he’s every inch the rock star in waiting. Finding out that his preferred tipple is champagne, and he’s a lover of gourmet food is the final proof. Before he’s even got on stage his charisma is obvious. But that’s not to say he’s arrogant or aloof. As Matt explains later, over a bottle of wine, “Before a gig I get really nervous and unhappy, but after a gig I feel totally replenished. I’ve been sick before gigs and I have problems being around crowds of people. But I find the second I hit the stage I’m OK.” And when he hits the stage at Exeter’s Cavern Club he’s more than OK. He’s quite simply jaw-dropping.

Film cameras cram the room for the benefit of their US label Maverick and Muse put on an electrifying performance. Their music twists and burns with melancholy energy and rage, but had such incredible beauty at its core that it becomes irresistible. To hear instant classics such as Uno , Falling Down , Falling Down , Unintended , and new single Cave , in such a small sweatbox is a privilege that the crowd will treasure when Muse are headlining stadiums in later years. Matt is consumed by the music, nearly eating the microphone and pouring out his soul with the passion and falsetto grace of Jeff Buckley . Fillip in particular is like hearing the singing of angels.

Afterwards the over-whelmed crowd stream out of the venue and Muse are ushered on to their impressive tour bus to film an interview for American TV. Chris then races home to catch a last night with his baby whilst Dom and Matt hit the bar with abandon. The party continues on the bus as we drive out of Exeter en-route for Liverpool

The Deftones, Tom Waits, Nirvana, and Travis Jostle for space on the stereo, the road crew produce more weed than the annual harvest in Jamaica and the fridge downstairs is laden with beer from the band’s rider. Matt grins with the knowledge of a fantastic show behind them and is for the first time utterly relaxed with “the journo” in his midst. “Always glad to have smokers on board,” he says by way of welcome as merchandise man Alain skins up another monster. It’s an essential part of touring.

“Yeah, hash, beer, the usual,” laughs Matt. “Oh, and my computer. I like to keep in touch with the fans, you know, “ he chortles.

“A towel is the most important thing,” believes Dom. “I keep forgetting one. You go and have a shower and come out dripping, and…”

“Clean clothes,” interjects Matt. “I’ve had the same pants on, I’ve slept in tem, for ooh…I don’t want to think about it! I usually just buy new boxers.” You should add socks and pants to your rider.

Matt: “We were dealing away in Munich to Everlast, and he was forever grateful. We’d asked our record company to get a but for us and they got us so much we had to share it around. Can’t take it on planes, can we Dom?”

Dom laughs a guilty laugh and decides it’s time for bed. Considering we’ve already watched the sun rise somewhere past Bristol we agree and hunt down a spare bunk. Ahh, bliss…Until 11:30am when we awake, fully clothed in what feels like an oven. Oh God, the wine, the beer, the drugs…Where are we?

In a service station near Manchester it transpires. Matt has gone to get some food and Yorkie, the driver has moved the bus. Result, one missing lead singer and Rick, the tour manager is non-too pleased. In fact he’s bawling out Yorkie and I’m scrabbling round for painkillers. When Matt is finally found he sits down for a quick chat which leads to their impending stardom.

“Things are getting quite surreal already,” he tells me. “People keep talking about stardom, but surely a lot of bands get that, and then the album comes out and it flops…The thing we’ve got is we’re aware of how it all works. We’re hands on with the creative side, and we’ve learnt there’s so much more. There’s interviews and photos and artwork. In America the video is more important than the album and I sussed that out before we made any deals. I’m not interested in all the lawyers and meetings but you’ve got to have control over the creative side. If all you’re interested in is the music then you’re gonna get a bit shafted.” Strange to hear such experienced words coming from someone with such an innocently gorgeous voice. Where did you learn to sing like that? “I’ve only started to sing properly in the last two years. I was whispering before and I’d had enough of people telling us we had to get a new singer. We wrote Cave (song) and I realised the only way I could get that note was to give it some fucking nuts and it changed my vocal chords, doing that song at every gig. And y’know, that changed the way I wrote songs.”

So have you been enjoying the tour?

“Oh yeah, we’ve never played Liverpool before, and it’s really nice to be playing to new people the whole time.” Not so nice when those people are trying to rip the fuel caps off your bus and help themselves to the TV, video, fridge, etc. “Keep the doors locked,” shouts drum tech Sean as we pull up at the Lomax . “There’s some dodgy guys outside.”

Thankfully, the bus is still there after the soundcheck and the band (Chris has arrived on the train) settle down to do another radio interview. In the tradition of all bands, there’s promotion to fill the day, but a lot of time is spent sitting around with nothing to do. “I don’t mind, “ Matt maintains, “It’s more interesting than what I used to do – painting and decorating.” Dom agrees. “Touring on a bus you’re waking up in a different city every day. I went down to the Cavern Club today. It’s a weird little place. It had a metal model of John Lennon outside.”

Do you hang out with other bands a lot?

“Not so much,” says Matt. “At festivals you see lots of bands, but you don’t hang out, you just look at them. You don’t want to talk to them particularly. Mind you I did stand with Courtney Love and Brian Molko at the side of the stage to watch Bush in Germany. All you could hear backstage was Courtney’s voice hollering around.”

Will you ever get that famous?

“I think you need more than music for that kind of fame. You need to have had a life that’s fucked up. A husband that shot himself…”

So if you don’t want fame, why do you do this? Is it for the lifestyle and the music?

“I dunno,” says Matt, with a self conscious laugh. “It’s lack of faith, lack of religion, lack of spirituality in the world and we’re trying to communicate with people. We’re trying to start up something, a big cult. I haven’t figured it out yet, but we’re doing something big.”

So what you write about?

So you’re yet another writer of angst?

“Erm, er… I wouldn’t say angst. It’s bigger than that!” Dom and Chris fall about laughing. Matt continues, “It’s more like there’s no religion, and what there is sucks, and because of that there’s a big hole in our lives that we’re all trying to fill up with computers and TVs and things like that. Playing the music is what fills the void for me.”

Did you always want to be in a band?

Matt: “I wanted to be a paramilitary instructor, or a scuba diving instructor. Something that was outside. I couldn’t do that nine to five thing.”

Do you miss your friends and family on tour? Especially Chris, now you have a kid.

Chris nods, “Yeah it’s difficult, but it’s what we’ve wanted to do for years.”

“You bring it upon yourself really,” says Matt. “There are drawbacks – there’s not much personal time, the last day off we had I just had to be alone in a room, naked, remembering who I was (laughs).”

Chris: “Wow, that’s extreme. But there are more drawbacks in other jobs. The only drawback of being on tour is that you miss your family. Whereas in other jobs, you’re like, ‘Fucking hell, I hate my job…’”

Are your parents proud?

Dom shakes his head slightly, “Mine are now. For a while it was tough. They kept asking, ‘What are you doing?’ They’d never been big music fans anyway. No one in my family was a musician and they had a lot of trouble grasping exactly what we were doing.”

Matt’s had been a happier time. “My mum was pretty fine. In fact, my mum told me to do this when she was really pissed. She was going ‘I know the future.’ It was really intense, I was only about 11, and I was going ‘Fucking hell!’ But I believed her.”

Chris: “We were lucky enough at High School ‘cos it had a good music department, lots of equipment that we could use.”

Matt giggles loudly. “That’s only ‘cos Miss Bird fancied you, and she really fancied Dom and she hated me. She kissed your arse Dom. In fact we bumped into her the other day and she was kissing your arse all over again. I was like, ‘Hey what about me!’ ha ha. There’s so many people coming out of the woodwork now, who really hated us and they’re all like, ‘Oh, wow!’”

Later on, before we take our leave of Muse, they lay waste to Lomax with a devastating set. Ecstatic bursts of guitar fill the room as Sunburn takes flight and during Escape Matt hammers his guitar so much, the strings snap right off. Afterwards relaxing in the dressing room with a beer and a new bunch of converts downstairs, it seems that they’re having the last laugh, over all their teenage detractors. Revenge is sweet!