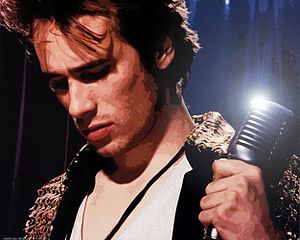 Like Matthew Bellamy, Jeff Buckley (November 17, 1966 – May 29, 1997) was a singer-songwriter, guitarist, and son of a famous musician (Tim Buckley). Both Buckley and Bellamy were blessed with incredible vocal range and their outstanding falsettos are a crucial part of their music. It is because of these kinds of similarities that people make comparisons between the two artists. Interestingly, Bellamy and Buckley also have the same number of letters in each of their 3 names (Matthew James Bellamy / Jeffrey Scott Buckley).

Jeff Buckley only released one completed studio album, the critically acclaimed Grace in 1994, before he tragically drowned while swimming in Wolf River in 1997. In 1994, Bellamy saw Buckley live at the Reading Festival and twelve years later, in 2006, Muse headlined the festival.