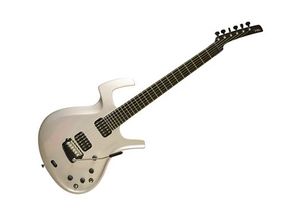 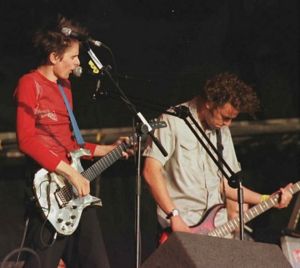 Bellamy at Glastonbury 2000 playing the Fly

The Parker Fly guitar was a range of guitars produced by Parker between 1993 and 2016. The guitar was designed by Ken Parker and Larry Fishman. The guitar is unique among other guitars in that it uses composite materials, and is known for it's light weight, thin neck and strong resonance. It's one of the first electric guitars to combine magnetic pickups and piezoelectric pickups.

Due to it's thin neck joint, Ken Parker wanted to strengthen the guitar by adding an exoskeleton. The first prototype of the Fly was built with a hardwood exoskeleton but the results Parker wanted were not satisfactory. Instead, he was inspired by his friend who is also a boat manufacturer to built an exoskeleton out of a composite carbon fibre/glass/epoxy material. A thin layer (thinner than the paint finish) was laid around the back of the body and the neck aswell as the fretboard to provide added rigidity, strength and added resonance.

Electronic-wise, most versions of the Parker Fly featured a set of two DiMarzio humbuckers and a piezoelectric pickups. Hardware-wise, the guitars featured a custom cast Parker vibrato bridge and Sperzel locking tuners.

The Parker Fly Deluxe was used by Matt between 1999 and 2000 for Showbiz touring. After it's live retirement, it has been used in 2003 during the recording of Absotluion, for the solo on the album version of Thoughts of a Dying Atheist, as it had a floating tremolo.