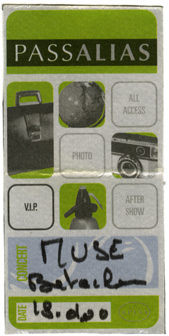 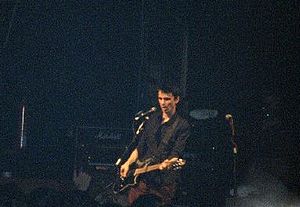 During the Ashamed outro, Bellamy thrashed his guitar about for a while, then swung it briefly before it flew out his hands next to Chris' microphone stand. He then proceeded to shout and sing into his microphone for a while. At this point, Dom and Chris were still playing the riff, with an increasing slower pace. Bellamy walked off stage, whilst Dom and Chris continued for another minute getting slower and slower, until Chris walked off. Dom carried on playing by himself for another minute until walking off stage followed by raucous cheers of applause from the audience. Several other songs were confirmed by online reviewers.[2][3][4] The first seven songs are known but the remainder of the setlist and its order are unknown.

An incomplete lossy (mp3) recording of the show was made though it was kept in close trading circles in France. This concert was considered one of the rarest concerts from the Showbiz era, though it has since surfaced and can be listened to below.

In addition to the audio recording, a video of Showbiz was uploaded onto MicroCuts.net, though no other footage of this show has ever surfaced. It is unknown if more footage from this show even exists. The audio and video recordings are from different sources.