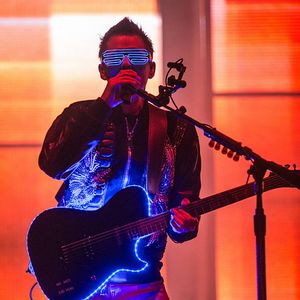 This guitar is almost identical to the Matt Black Stealth except it features an LED light strip around the body of the guitar. The guitar is fitted with all black hardware, and custom black Tone and Volume knobs, and a new Manson logo on the headstock.

It has been used live for Dig Down and Madness, and presumably any other songs tuned down half a step from standard tuning (Eb tuning).

The Stealth LED has been replaced with a Manson TronCaster for the 2019 Simulation Theory World Tour.