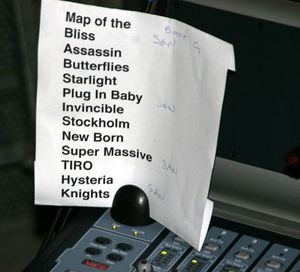 A pre-Black Holes and Revelations tour gig in Milan. As expected, Morgan Nicholls was there to provide keyboards.[source?] However, Matthew Bellamy still played keyboard parts in both "Butterflies & Hurricanes" and "New Born",[source?] quelling fans fears that Nicholls would be completely replacing Bellamy for keyboard parts.[source?] The gig marked the debut of "Invincible" and "Map of the Problematique" live.

Tickets were available for two days prior to general sale exclusively linked from Muse.mu.[source?]

Video from the gig has the venue listed as Alcatraz. Unable to find source for the Rolling Stone name of venue. Video clip of Stockholm Syndrome from the gig

"Just want to say thanks the fans who came to the warm-up gig in Milan on Wednesday night. It was great to play some new songs for the first time, and the Italian fans were brilliant as ever. Sorry the gig was a bit shorter than normal, we look forward to coming back for the main tour in Italy later in the year, and we hope to see you then. Cheers. Muse."