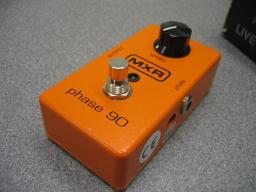 The MXR Phase 90 is a classic phaser pedal. It almost defined the classic phase shifting sound. It only has one knob which controls the speed/frequency/rate.

The pedal helped launc the MXR company in 1974. It's first models made until 1977 had a script style logo, which changed to it's current block logo. Production of the original MXR Phase 90 closed in 1984, when the company went bankrupt and was subsequently bought by Jim Dunlop, keeping the original orange design but adding an LED indicator light and an AC power supply. Different versions of the pedal exist, including the standard block logo version, a reproduction of the script logo version, and an Eddie Van Halen signature model.

Apart from Eddie Van Halen, Tom Morello is another prominent artist who's known for using the Phase 90.

Like Morello, Matt is using the standard block logo version of the pedal. It can be heard on a variety of songs such as Plug In Baby, the solo of Thoughts of a Dying Atheist, Assassin (live), Supermassive Black Hole (live) and Showbiz (live). The Phase 90 circuit is also built into a couple of Matt's guitars; the infamous Manson Delorean and the Manson Mirror 1.0 and Manson Mirror 2.0. The Mirror models have been used almost exclusively on Plug In Baby. The controls for the P90 are accessed through the back panel of the guitar. The inbuilt Phase 90 was also a custom option for the limited run of Manson's DL-1 Matthew Bellamy Signature Guitars.