The Manson DR-1 Series is a limited series of 99 identical guitars, released by Manson in 2016 as special 'Numbers' editions, with all of them having a special marking of "DRONE:0X" on the body. The guitars were designed by Bellamy after his inspiration during the making of the album Drones. The guitars appear to have been built around the Manson Matt Black 2.0. According to Mansons, the guitar sits somewhere between a Cort MBC-1 and a Manson MB-1. Bellamy presumably owns the first four DR-1's of the batch, the #00, the #01, the #02 and the #03, with only the #00 and the #03 making live appearances to date. 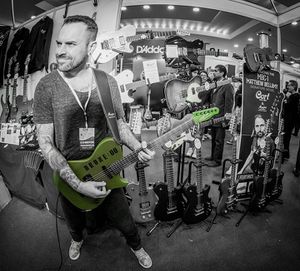 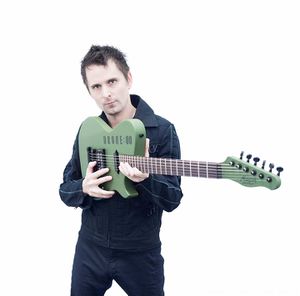 This guitar is the first of the four DR-1's that Matt owns. This guitar was first seen at a The Guitar Show in Birmingham, in February of 2016, where this new signature series was introduced. Back then, this guitar featured a standard neck pickup and normal volume and tone knobs.

The guitar was modified for Matt after the showcase. It got a Sustaniac in the neck position and custom control knobs.

After having it photographed before the London O2 Arena 15th show, it was first used live at the Zürich 11th gig. It was last used at the Glastonbury Festival 2016 gig and was replaced by the DR-1 #03. 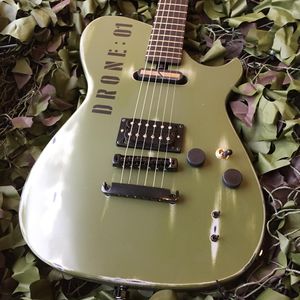 This guitar is the second of the four DR-1's that Matt owns.

In comparison to the DR-1 #00, this guitar features a lot of the specifications of the other new Manson guitars that he got in 2015 and 2016. Instead of the normal Gotoh bridge this guitar has the 510 version and the area around the truss rod adjuster is the same as on all other 2015/16 guitars. The finish of this guitar has a relic style.

This guitar has not be seen live yet. 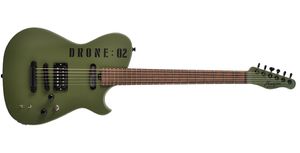 This guitar is the third of the four DR-1's that Matt owns.

It is exactly the same guitar as the modified DR-1 #00, only that it has normal control knobs and normal tuning pegs.

Like the #02, this guitar has not be seen live yet. 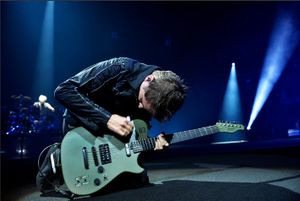 The fourth DR-1 that Matt owns.

The DR-1 #03 was used live since the Eiffel Tower 2016 gig. It was later used in Rig A for the 2016 summer festival shows. Since 2016, it has not made any live appearances, but was seen used in the studio, recording Simulation Theory.

As mentioned above, the guitar's been seen in Muse's Instagram pics during the making of Simulation Theory. Bellamy fitted on a Fishman Tripleplay MIDI Pickup system. It's presumably been used to record The Dark Side and probably a couple of other songs on the album which Bellamy used the Tripleplay on.