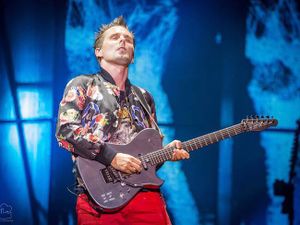 This guitar is almost identical to the Manson Matt Black FR, except it's covered in dark chrome colour. The guitar's been seen with both a covered and an uncovered MBK-2 pickup. It is likely that one of them is in Rig A and another in Rig B. Both guitars feature the old Manson logo.

The YES/NO switch sits in place of the tone control knob. This was previously thought to be an on/off switch to control the rumoured integrated whammy control on the Patented MID1 Manson, this pitch shift effect was instead achieved by using the Floyd Rose with the Sustainiac on Harmonic mode The YES/NO switch simply reverses the kill switch functionality. This means the guitar is 'muted' and flicking the killswitch on the top horn activates the guitar signal when switched to "NO". This is bypassed and the killswitch functions as normal when set to "YES".

These guitar body shapes mark a departure from previous Mansons Matt used that feature a Floyd Rose system, as they do not have the rounded "Lozenge" shape, as seen on the likes of the Chrome Bomber and the Stealth Bomber models.

It has been used live since Muse started touring US amphitheatres in 2017.

The Chrome FR is used for songs with standard tuning requiring the use of a whammy bar. It's labeled by Matt's tech as "6" and "Standard"