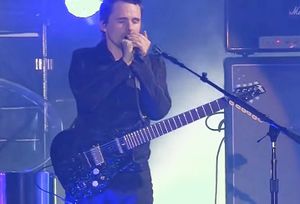 Built by Tim Stark in March 2015, this guitar, as with his duplicates for 2015, is a live duplicate of the Manson Black 7 String for either 'Rig A' or 'Rig B'. The idea is that Matt can have a set of guitars for use in the Americas (Rig A), and another rig for use in other regions of the world (Rig B). As with the original, the guitar had to match a specific weight requirement (around 2.4kg) so multiple holes were drilled into the body, neck, hardware to reach the target weight.

Unlike it's twin guitar, the Manson Black 7 String, this guitar features an all black Gotoh bridge and a truss rod adjuster below the end of the neck. It also has a glitter-ier finish than the original Black 7 String.

Like it's predecessor this guitar was used first live at a gig in Cologne, but this time at Gloria Theater, in 2015.

The guitar was used live exclusively for Supremacy.