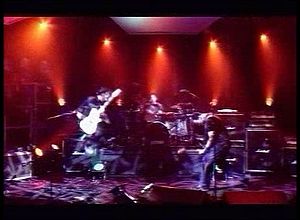 This performance of Hyper Music also made it onto a DVD called "Later... Even louder with Jools Holland" which was released 30th May 2005.

It was filmed about 30th October 2006 but it wasn't broadcasted until 3rd November 2006. Muse headlined the show and played Starlight, Map of the Problematique and finished playing Knights of Cydonia, with Dan playing the trumpet part.

They were also filmed while they were watching other artists' performances. A video of that can be seen here.

This performance of Uprising saw the debut of the Manson Mirror Kaoss guitar.

Muse played Psycho two times, Mercy and Dead Inside. During the first rendition of Psycho, the chorus after the second-to-last Drill Sergeant part and the solo were skipped and the song went directly to the last chorus. Also, during this performance, Bellamy's in-ear monitor pack fell out, leaving him with no monitor mix to play with on live TV.

Muse did a rehearsal the day before, playing Something Human, but the rest of the soundchecked songs are unknown.