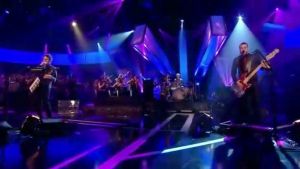 A TV Show promotional in support of The Resistance.

Muse both opened and closed the 30 minute live episode of Later... with Jools Holland with Uprising and United States of Eurasia, respectively. As with the performance six days earlier for Taratata, a string ensemble accompanied the band during United States of Eurasia (this time with six performers). Matthew Bellamy made a minor mistake towards the end of the song. Muse also performed Undisclosed Desires after the live episode had finished, and this performance was included in the pre-recorded version of the show, broadcast by the BBC on the 18th of September 2009.

Uprising was included as the first track on the Later... Live With Jools Holland 2 compilation CD, released in the UK during October 2009.